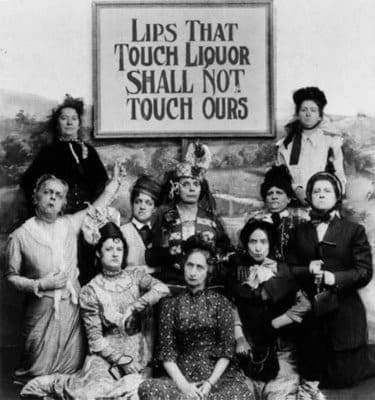 When I think about it, it still boggles my mind that the United States of America once passed a constitutional amendment outlawing alcohol. The movement that made this happen was composed of a bunch of fusty tee-totaling ladies that believed alcohol to be one of the greatest evils known to man.

Most unfortunately, they mislabeled themselves the “Temperance” movement, when they should have called themselves the abstinence movement. Through their efforts, everything from beer to wine to whiskey was declared completely illegal. This insanity was short lived, but it forever marred the name of temperance—a virtue we should all admire and pursue.

The good news is, temperance is not just about tee totaling and avoiding alcohol. Nor is it about joyless consumption of food and drink in miniscule quantities. So what exactly is it?

The simplest definition of temperance is “the virtue which moderates in us the inordinate desire for sensible pleasure, keeping it within the limits assigned by reason and faith.” (Divine Intimacy).

Before the Fall, all of the physical senses were in complete harmony and controlled by reason. The first man never became compulsively obsessed with eating or sex or getting drunk. He never got addicted to anything, and he never experienced unhealthy cravings.

But after sin entered the picture, all of the physical senses, by nature good and healthy, were unleashed and were no longer controlled by reason. Our powers of self-mastery were lost, and we began to drift naturally to unhealthy excess in the pursuit of physical pleasure.

These unleashed senses make us in many ways like a child set free in a candy shop. All we can think about is the pleasure of the moment, and we gorge ourselves to excess without worrying about the consequences. Of course, we always get sick later and regret our indulgence, but we gorge anyway.

The virtue of temperance, on the other hand, takes our wildly free senses and pulls them back into control, harnessing them with the reigns of reason. When faced with the temptation to excessive physical pleasure, temperance allows us to keep from excess. In other words, this virtue enables us to enjoy a beer without getting drunk, or eat a piece of cake without becoming a sugar addict.

Like all the virtues, temperance must be learned through practice and patience. While it may not sound like much fun, the only real way to become temperate is through prayer and self-denial. In other words, you have to tell yourself no now and then.

Americans especially are bad at this. We like big amounts of everything. Instead of a single hamburger, we want a triple cheeseburger loaded with bacon, three kinds of cheese, and every condiment imaginable. And we want it to be accompanied by a 60 oz. soda—diet of course. We don’t want a small, carefully prepared, and delicious meal, we want an all-you-can-eat buffet with dozens of choices with which to gorge ourselves.

But the irony is, if we practice temperance and control ourselves, we will find we actually enjoy things more and not less. Temperance will lead us  to a new gratitude and satisfaction that we could never find in excessive self indulgence.

Here are three practical ways to start on the path to temperance:

Again, the point of this is not just a joyless self-denial, but rather a positive learning of self-control that will teach us to enjoy less more.

3) Get uncomfortable – Many of the saints have said that one of our biggest enemies of our spiritual lives is the love of comfort. For example, we want to lay in bed as long as possible rather than getting up immediately—that sort of thing.

While they may seem harmless, these little self-indulgences add up and increase our desire to choose the path of least resistance. We begin to value pleasure and ease more than we value doing what is right and good. And we become intemperate, controlled by our desires instead of our reason.

Obviously, the best way to overcome this gravitational pull toward ease is to push yourself into uncomfortable territory. Do some things you don’t like as you have opportunity, even if it is getting up immediately instead of hitting snooze ten times. This will exercise the muscles of temperance, enabling you to choose the good and deny your appetites when you really don’t feel like it.

Temperance is usually considered a gloomy and dour virtue, practiced by those who don’t know how to have any fun. This simply isn’t true, however. When all of our appetites are controlled by reason and are working in harmony, we will find a new peace. We won’t be controlled by restless cravings and desires anymore, but will instead be able to do what we really want to do (like serve God), rather than what are passions are telling us to do.