Tolkien Speaks: The Secret to a Happy Marriage 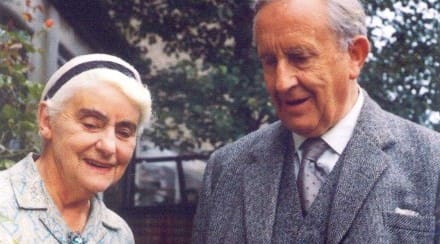 J.R.R. Tolkien was a romantic. When he met his future wife, Edith, at the age of 16, he was instantly smitten with her and immediately began an informal courtship, taking her to local tea houses on a regular basis. When the priest who acted as Tolkien’s guardian found out about his romance, however, he forbade him from having contact with Edith until the age of 21, so as not to distract from his studies. Tolkien reluctantly obeyed. For five long years, he waited for the one he knew was his soul mate. On the evening of his 21st birthday, he wrote a letter to Edith, declaring his love and asking for her hand in marriage. A week later, they were engaged to be married.

Throughout his life, Tolkien wrote love poems to his wife, and in his letters to friends, he writes glowingly about her. But perhaps his most famous and enduring tribute to his beloved bride was weaving his romance with her into the mythology of Middle Earth in the story of Beren and Luthien. A more moving tribute would be hard to find. He wrote to his son, Christopher:

I never called Edith Luthien – but she was the source of the story that in time became the chief part of the Silmarillion. It was first conceived in a small woodland glade filled with hemlocks at Roos in Yorkshire (where I was for a brief time in command of an outpost of the Humber Garrison in 1917, and she was able to live with me for a while). In those days her hair was raven, her skin clear, her eyes brighter than you have seen them, and she could sing – and dance.

Even in death, Tolkien would not leave his Edith. He is buried next to her under a single gravestone inscribed with the names Beren and Luthien. To use the popular phrase, Tolkien was very much “in love” with this wife.

J.R.R. Tolkien was happily married for 55 years. In contrast, the modern divorce rate is shockingly high, and some are giving up on monogamous marriage altogether, claiming it simply isn’t possible or healthy. What did Tolkien have that many marriages do not? How did he make it work? The answer is simple: He understood that real love involves self-denial.

The modern notion of love is pure sentiment, and it is focused primarily on self. If someone excites you, if they get your pulse racing, if they affirm you and your desires, then you can say you are in love with them according to modern definitions.

While deeply attached to his wife, Tolkien rejected this shallow idea of love. He embraced instead the Catholic understanding of real love as focused on the other—something that requires a sacrifice of natural instincts and a determined act of the will.

To illustrate Tolkien’s profound view of married love, I want to share an excerpt from a letter to his son, Michael Tolkien. It is a different side of Tolkien that many are unfamiliar with. To those with an overly sentimental view of love, his words may be shocking, even offensive. Yet, he articulates truths that, if understood and embraced, bring true and lasting happiness to marriage. Here is a truncated version of his letter.

“There is No Escape”

Men are not [monogamous]. No good pretending. Men just ain’t, not by their animal nature. Monogamy (although it has long been fundamental to our inherited ideas) is for us men a piece of ‘revealed ethic,’ according to faith and not the flesh. The essence of a fallen world is that the best cannot be attained by free enjoyment, or by what is called “self-realization” (usually a nice name for self-indulgence, wholly inimical to the realization of other selves); but by denial, by suffering. Faithfulness in Christian marriages entails that: great mortification.

For a Christian man there is no escape. Marriage may help to sanctify and direct to its proper object his sexual desires; its grace may help him in the struggle; but the struggle remains. It will not satisfy him—as hunger may be kept off by regular meals. It will offer as many difficulties to the purity proper to that state as it provides easements.

No man, however truly he loved his betrothed and bride as a young man, has lived faithful to her as a wife in mind and body without deliberate conscious exercise of the will, without self-denial. Too few are told that—even those brought up in ‘the Church’. Those outside seem seldom to have heard it.

When the glamour wears off, or merely works a bit thin, they think that they have made a mistake, and that the real soul-mate is still to find. The real soul-mate too often proves to be the next sexually attractive person that comes along. Someone whom they might indeed very profitably have married, if only—. Hence divorce, to provide the ‘if only’.

And of course they are as a rule quite right: they did make a mistake. Only a very wise man at the end of his life could make a sound judgement concerning whom, amongst the total possible chances, he ought most profitably have married! Nearly all marriages, even happy ones, are mistakes: in the sense that almost certainly (in a more perfect world, or even with a little more care in this very imperfect one) both partners might have found more suitable mates. But the ‘real soul-mate’ is the one you are actually married to. In this fallen world, we have as our only guides, prudence, wisdom (rare in youth, too late in age), a clean heart, and fidelity of will…

Love is a Battle

As I said, many might be offended by Tolkien’s straight talk about marriage. “If you really love someone,” they would argue, “it shouldn’t be hard to love them! It shouldn’t be a struggle. Marriage as mortification? How offensive! You must not really love your wife.”

This line of thinking misses the point, for real love is a fight against self-love. It is a struggle against our fallen and very selfish natures. It is a dying that gives life. And any man who is honest with himself will admit that Tolkien was right. The struggle for chastity and fidelity never ends, no matter how much you love your wife.

The essence of love is an act of the will. Feelings come and go in marriage. Those with happy marriages are those who choose—choose to love their wives more than themselves, who choose to sacrifice their short-term desires for long-term happiness, who choose to give instead of to take.

And you know what? When you choose to be faithful, happiness inevitably follows. So many give up when things become difficult—at the very moment when, if they would simply choose to be faithful and fight, they would find real happiness waiting at the end of the struggle. As another happily married Catholic, G.K. Chesterton, once wrote, “I have known many happy marriages, but never a compatible one. The whole aim of marriage is to fight through and survive the instant when incompatibility becomes unquestionable. For a man and a woman, as such, are incompatible.”

True joy and lasting happiness in marriage are possible. Countless marriages, including Tolkien’s, prove that fact. But we will never find this joy if we are focused on ourselves. The paradox is that you must forget yourself to find the happiness that you seek.

Men, if you want a faithful and happy marriage, you must die to yourself. You must put your wife first. You must love her through sacrifice and self-denial—the same way Christ loved his bride, the Church. This is the simple secret so many miss.