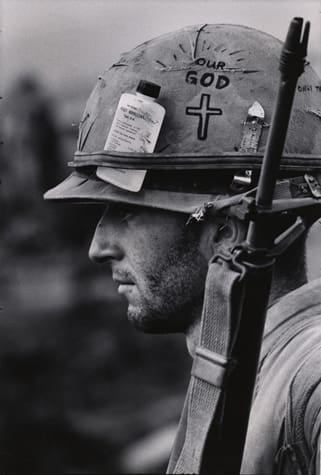 This post is part of the ongoing #FultonFridays featuring the writings of Ven. Fulton Sheen.

Goodness, patriotism, honesty and loyalty are losing their battles not by conflict, but by default. Those who are called to be defenders of what is right are not wounded in the battle. They flee.

Courage has always been in the past the attribute of those who have faith; now the moral leaders become defenders only of the feeble. They are afraid to speak on vital truths to their troops, fearful that they may incite a revolt or be unloved. The result is “every man does what is right in his own eyes.”

Actually, the troops are yearning for strong leaders who will challenge them and sound trumpets with clear notes. But seeing the shepherds uncertain and afraid of wolves, the sheep scatter.

When Peter and John were arrested and brought before judges for preaching Christianity, the judges were struck by first their “boldness” and secondly by the fact that they were unlearned. Their strong convictions came not from academic degrees, but from their being filled with the Spirit of God. When David’s commander Joab “saw the battle was against him in front and rear” he and his brother Abishai pledged mutual support, shored up their moral courage and left the final decision in the hands of God. “If the Arameans are too strong for me, then you shall help me,” Joab said, “but if the Ammonites are too strong for you, then I will come and help you. Be of good courage and let us fight bravely for our people and for the cities of our God; and may the Lord do what seems good to him.”

In the area of religion, the secret of courage is: “I will fear no evil, for Thou are with me.” Responsibilities are no longer burdensome if one realizes that the Divine works in us. Want of courage is want of Faith. If a bishop, for example is afraid to tell a minister in the sanctuary not to appear in patched overalls and leather jacket, it is because he has a less awesome concern for the glory of God than he is in dread of the cutting rejoined of the hippie.

All the fears of life are expelled by a great love, and love is the only thing that can successfully cope with them. On the contrary, the fear of evil is essentially an unbelieving thing. All weakening anxieties have their roots in practical unbelief.

The tragedy in the loss of courage and boldness on the part of leaders is the latent courage in the young and their readiness to follow those who have a high ideal. The so-called generation gap does not exist; it is a spirit gap—the distance between the leaders who are not on fire with ideals and the followers who are unlighted torches waiting for the flame. The young are quick to pick out phonies as they are anxious to be inspire by those who are unafraid of being unpopular once truth is at stake.

Our democratic process sometimes makes for weakness than strength. A candidate for office keeps his finger on the pulse of the electorate; he finds out by survey what they want and then promises to give it to them, generally at the expense of the public treasury. His campaign is directed to the desires of the people, but never to their needs. The result is the electorate is rarely offered a chance to vote for a real leader.

It is worth recalling that the majority vote about the Israelites going into the Promised Land was 10 to 2. Only Caleb and Joshua favored it. The masses would have killed the two of them if Moses had not interceded. In religion and politics alike, leadership return will when a man will not be afraid to make enemies because he loves God above all things.