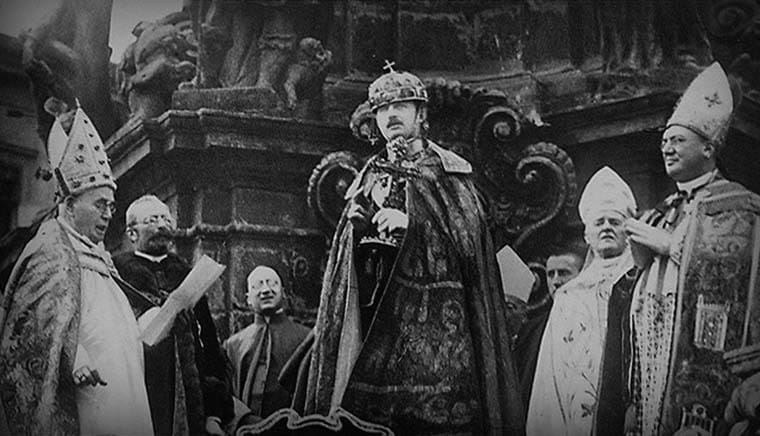 The 15 October 2022 event concerns the last emperor and king of Austria-Hungary, commonly referred to as the Austro-Hungarian Empire, which controlled about a third of Europe [mostly eastern Europe] and supplied many immigrants to America. This empire came into existence in the early 19th century and was the successor-empire to The Holy Roman Empire, coming to an abrupt end in 1918—104 years ago. The Habsburg family ruled both of these for a total of about 650 years. Many Americans of eastern European descent can trace their heritage back to this part of the world and time period.

The event venue will be able to accommodate up to 2200 attendees and will be held for about six hours on a fair-weathered autumnal Saturday, and will certainly give more meaning to the usual Octoberfests of this month! Some of the symposium speakers include his excellency Bishop Athanasius Schneider; Archduke Eduard von Habsburg who is currently Hungary’s ambassador to The Holy See, and, he is the great-great-great grandson to Bl. Karl’s predecessor, Kaiser Franz Josef. Also speaking is Princess Maria-Anna von Habsburg-Galitzine, Bl Karl’s granddaughter; Mr. Charles Coulombe, author, historian, Bl. Karl biographer; additionally on stage is the expert on all things “Karl”, Suzanne Pearson, the North American delegate of the Emperor Charles Prayer League; …and more.

After World War One [1914-1918] had been underway for 2 years, the long-reigning emperor of one of the warring empires –Austria-Hungary–died and the throne was succeeded by his grandnephew, Karl, a visibly saintly man, who spent his precious two years on the throne making multiple offers for peace that were rejected. This caused the war to be extended two more years and millions of more deaths. In 1918 WWI came to an end, the empire was dismantled with the help of masons and other anti-Catholics here and abroad, and Karl and his wife, Empress Zita, were arrested and literally shipped 2000 miles away to a Portuguese island called Madeira off the coast of west Africa, with their seven children following later. He died there soon after, in penury, at the age of 34, leaving his pregnant wife of ten years, the Servant-of-God Empress Zita, and seven young children.

Historians believe that had this young, holy emperor been able to remain on the throne, the next century of world-shaping horrors in eastern Europe [civil wars, Nazi-ism, then communism, and now in many parts practical atheism] would not have occurred. And by extension, the world would be today a much better place in which to live.

During the last century the good emperor has been the sole subject of many, books, articles and conferences. And his movement continues to thrive today, here and around the globe.

Emperor Karl saw his office as a commission from God. This did not mean in any way an authorization of the arbitrary execution of power, but rather the absolute duty to follow and imitate the example of Christ in His exalted position of being the one true King. Because of this, Karl made no important decision without prayer. An ardent reverence for the Eucharist and devotion to the Sacred Heart of Jesus gave both purpose and direction to the emperor. Emperor Karl, therefore, could not simply put his commission aside. An abdication, which he refused to make, even in the face of death threats, could have secured for him wealth and comfort (like the German Emperor Wilhelm II did at the time). Karl, little concerned with wealth and comfort, accepted misery, hardship and impending death upon himself in order to remain faithful to the duty of service to the people of Christ entrusted to him.

Why should someone want to know about Bl Karl? Bravery. Courage. Fortitude. All in the face of evil and suffering. He suffered, the last few years of his life. And we usually have more to learn from people who have gone through suffering. But it didn’t just stop there: he kept his faithfulness to God, he stayed on-mission and he kept his joy.

We’re talking about a supremely virtuous man who inherited a horrible mess, just thrust upon him, without having asked for it. Sometimes that happens to us, and how Bl. Karl handled it should be inspirational to us.

When one reads the biographies of Bl Karl, you figure out that his story is especially relevant to us today. You also learn that the collapse of his empire is what unleashed the moral horrors we so enjoy today! So, if you ever ask: how did we get into this pot of filth that the world is in? Again, many historians believe that the collapse of this old Catholic empire was the dam that burst.

And though the literature available on the subject of emperor Karl is rather extensive, he wasn’t really supposed to be the emperor. He was not exactly groomed to be emperor, though he had a robust education, rearing and training.

Karl, in his youth, had little—practically zero—chance of becoming emperor because there were so many other men—at least five–before him in line. And this made a nun’s prediction when he was five years old that he would one day be emperor so inscrutably unlikely and rather far-fetched. But through an odd succession of odd deaths, he was, during a massive-scale war to which he was opposed, thrust onto the throne, at age 29, of a vast empire. This required him to finish out what we now know was the last two years of this 650-year European empire and dynasty.

Though he was very much in the world, he was also very much a man of prayer, of deep spirituality that was put into concrete action. He was of great temperance, prudence and great compassion, real compassion for his peoples.

He spent his time on the throne not prosecuting the war he inherited but offering peace, asking for an end to it. The parties with whom he was warring figured out that they could profit more by crushing him and his empire than by accepting his hand for peace, even at the expense of millions of more deaths that that would cause. But that would look bad on them, so they, knowing he was a man of great goodness, launched a calumnious smear campaign to make Karl look bad. And yet, Karl remained resolute and maintained his faithfulness and inner joy.

The 2022 Bl. Karl Symposium will help us not to let his life of excellence go to waste as we do not want to let the fact it’s been 100 years since he lived separate us from his greatness that we can learn from. His death has caused the Blessed Emperor Karl Movement, which is so applicable and relevant to these times, as more than ever! And that is what this Blessed Karl symposium is going to be about.

Saint Pope John Paul II [himself named, after the emperor, Charles, Poland having been part of the empire] beatified Emperor Karl in 2004. His Cause for canonization remains open and active. His feast day is not the day he died [April 1] like other saints, rather the day he and Zita entered into the Sacrament of Matrimony, that is, their wedding anniversary: 21 October…very near the time of this year’s event.

FOR MORE INFORMATION ABOUT THE SYMPOSIUM, OR TO SECURE TICKETS, VISIT THE OFFICIALLY EVENT WEBSITE: www.BlessedKarl.org