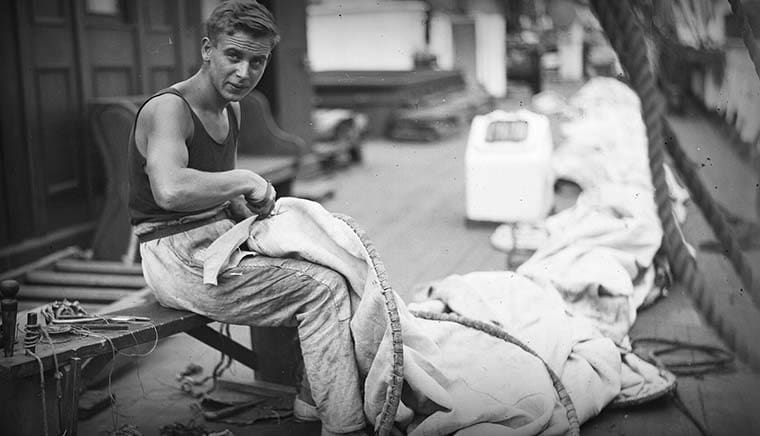 And what about “polite”? We think of the word today as meaning, more or less, mannerly. A polite person is somebody with manners; somebody who has the kindness to say please and thank you. But in origin the word is closer to polish, with the sense that the polite person is a sort of gleaming silver teapot. From its Latin roots (politus, the past participle of polire, to smooth or polish) through its emergence in Middle English and well into the 1700s, the word meant a thing buffed up or cleansed or even organized, although other meanings also emerged. So it always is with important words.

So once upon a time it was a man’s sword that might be polite—if his squire kept it burnished; then, late in the 1400s, the knight himself might be polite if he’d been to school and was “polished” enough to be able to declaim upon the liberal arts; and finally, sometime after 1750 or so, a man might be thought gentlemanly, to a degree at least, simply for doffing his cap to a lady.

. . . I believe with Henry Hazlitt (1894-1993) that “manners are minor morals. Manners are to morals as the final sand papering, rubbing, and polishing on a fine piece of furniture are to the selection of the wood, the sawing, chiseling, and fitting. They are the finishing touch.” (I’ve seen the “manners are minor morals” quote attributed to John Dewey, C.S. Lewis, Aristotle, and others. The estimable Judith Martin, a.k.a. Miss Manners, has been pressing the phrase into American minds for many years.) Manners are good.

On the other hand, I am inclined to believe in tit-for-tat, in what Robert Axlerod (in his 1984 book, The Evolution of Cooperation) has called the “robustness of reciprocity.” A gentleman is a warrior, not a doormat, and he will cooperate with others only insofar as they cooperate with him. Cooperation begets cooperation, kindness begets kindness, but neither cooperation nor kindness is quite the appropriate response to aggression or rudeness.

It is true that chivalry, especially in the tradition of courtly love, has always been concerned with manners and style, whether in the medieval court at Poitiers or in the Renaissance court at Urbino. It’s as Russell Kirk wrote (echoing his hero Edmund Burke): “Between the decay of manners in our time and the decline of artistic taste and faculty, there exists some close connection. From the beginning, the perfection of the arts has been bound up with the idea of religion and the idea of a gentleman.”

For Dr. Kirk (1918-1994), the gentleman was not simply the traditional patron of the arts; he was their inspiration as well. He was, in his own way, a living work of art. A chivalrous man has always been recognized in part by his refinement: his fine etiquette, his spiffy clothes, and his elevated ideas. But all these were and are available to any man, which is why in literature since the 17th century at least a man called “gentleman” has often as not been a cad.

Far be it from me to call for a purge of style from the definition of the compleat gentleman. But, trust me, nobody has better manners or finer suits or more skill in debate than the devil himself. Does anyone doubt that the devil appears to be a consummate gentleman? And is there any question that he completely lacks chivalry?

. . . Professor Axlerod’s book details the reasons why the tit-for-tat strategy outperforms all others in a computer game called Prisoner’s Dilemma. The scheme’s success, he writes, is “due to being nice, provocable, forgiving, and clear.” A further amplification provides an ideal description of the compleat gentleman: “Its niceness means that it is never the first to defect [to fail to cooperate], and this property prevents it from getting into unnecessary trouble. Its retaliation discourages the other side from persisting whenever defection is tried. Its forgiveness helps to restore mutual cooperation. And its clarity makes its behavioral pattern easy to recognize, it is easy to perceive that the best way of dealing with tit for tat is to cooperate with it.” – from The Compleat Gentleman (2004)