In this episode of The Catholic Gentleman, Sam and John discuss why a man is incomplete without religion. We go through the relativistic and consumerist mindset of the modern world, and finish with how Christ’s Church is the only point of truth we as men can trust.

In this episode we discuss: There is something about our fallen nature that compels us to disobedience. Sometimes it’s full-blown, blatant disobedience. Other times it’s more subtle like our mom encouraging us to read a book that we just can’t find the time to read. We are all guilty of it…except one: St. Joseph (I’m not counting Mary because she was free from original sin). There is so much we can learn from what scripture says about him, his actions, and more importantly, his silence. Let’s look at one story in particular from scripture that leads us to a greater appreciation for his perfect obedience to the will of the Father.

The Flight into Egypt

Matthew 2:13 says, “Now when they had departed, behold, an angel of the Lord appeared to Joseph in a dream and said, ‘Rise, take the child and his mother, and flee to Egypt, and remain there until I tell you, for Herod is about to search for the child, to destroy him’”. Let’s break this down a bit and really dig into what Joseph is facing in this moment.

Someone wants to kill Jesus, the son of God. We often overlook the subtleties because we know the whole story, but Joseph didn’t! All he knew was someone wanted Jesus dead. Why did the Lord have to flee anyways? He’s God. Theophylact of Ochrid makes a very strong point when he says, “Even the Lord flees, to confirm that He was truly man. For if He had fallen into the hands of Herod and had not been slain, it would have seemed that He had been made flush only in appearance.”

What this tells us about Joseph is that it wasn’t an act. Maybe it was part of the Divine plan, but it wasn’t on Joseph’s agenda. Joseph is scared, but there’s no time for that. He doesn’t ask the angel any clarifying questions which probably would have been cool considering the circumstances. Like, “Sure thing God. What am I supposed to do about work though? I don’t have a work visa in Egypt and I also don’t speak the language…Oh, and I doubt I’ll be able to fit all my tools on the donkey considering we need to eat….” Not a word.

Egypt is far away. Really far. 430 miles far. That’s Chicago to Pittsburgh which, by car, is still 7 hours. The road wasn’t one of those paved nature trails with cool shade during the day and a lighted path at night. Also, there weren’t many Holiday Inn Express hotels back then. If they traveled 15 miles a day which is pushing it considering a child under the age of 2, and the strong likelihood they had only 1 donkey, that’s a journey of almost 30 days. You still have the unbearable desert heat, and the strong possibility of bandits and other miscreants.

Suffice it to say, this was a dangerous journey. Not to mention they were traveling with a young child. Unlike our culture today where you move wherever work takes you, people didn’t move…ever. I’m not just talking husband and wife, I mean generations didn’t move. So there’s Joseph, in the middle of the night being told by an angel to pack up and travel 430 miles to a foreign land, a land he’s never been to, and the same land where his people were persecuted for 215 years. This isn’t exactly the first place I’d think to go if my family in danger. Again, Joseph didn’t ask how he was supposed to do this, he didn’t ask for directions. He just went.

The last thing I want to point out is that Joseph didn’t get a timeline. It wasn’t, “Go to Egypt for 6 months,” it was, “…remain there until I tell you.” Can you imagine the conversation with your wife, “Hey honey, an angel just told me we need to move to Fargo…tonight. I don’t have a job lined up yet and we’re gonna stay for a while…ish. Oh, and we probably shouldn’t wait until tomorrow because the police want to murder our son.” Joseph was a carpenter, this was a pretty lowly job back then. It’s unlikely he had a nest egg just waiting for retirement. They lived job to job. If you can’t work, you can’t feed your family. There was no emergency fund laying around to cover 3 months of living expenses. This was a total and complete act of faith and obedience to the will of the Father.

St. Joseph was a true man. He did exactly what the Lord asked of him every time and without delay. He lived the fourth commandment to the letter. He is a model of obedience that we should all aspire to follow more closely.

Here’s my challenge to you: reflect on this story of St. Joseph. Imagine yourself in his shoes. Now think about your own life and where you are being called to obedience. Remember that obedience extends beyond just our parents. According to the Catechism (2199), “This commandment includes and presupposes the duties of parents, instructors, teachers, leaders, magistrates, those who govern, all who exercise authority over others or over a community of persons.” Pick something you’ve been ignoring, delaying, or flat out rejecting and do it. Do it for St. Joseph. I think you’ll be surprised by the blessings.

St. Joseph, Patron of Workers, pray for us.

Jonathan Conrad is founder of The Catholic Woodworker where he crafts heirloom-quality Catholic goods and uses woodworking to evangelize. 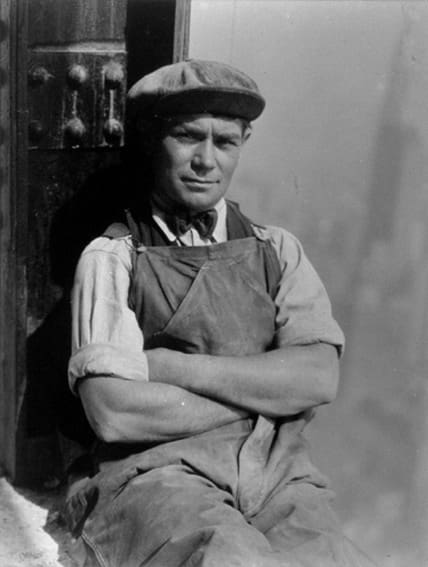 It’s easy to get complacent in our places of employment, to work for the weekends or to collect a paycheck that helps us live “real” life outside of the workplace. But work should never be meaningless drudgery, nor should it be separate and contained from other aspects of our life. It should rather be an act of loving service to God, bringing glory to him who is our Maker.

Work isn’t a curse, it is ordained by God and is a holy duty. Our heavenly Father himself taught us how to work and rest, and even in Paradise, where there was no pain or sorrow, our first parents worked joyfully, tending the earth and keeping it.

St. Joseph, the Guardian of our Redeemer, also worked with his hands and taught the child Jesus his craft of carpentry. Indeed, St. Joseph teaches us that working silently for Jesus and Mary is the highest calling of every man. We should learn from our humble model, St. Joseph, to have no greater happiness than to work, and to work well as an act of sacrificial love.

Here, then, is a prayer to St. Joseph, asking his intercession for a good and holy work day. I have begun to pray it daily, and I invite you to as well.

O Glorious Saint Joseph, model of all those who are devoted to labor, obtain for me the grace to work in a spirit of penance for the expiation of my many sins; to work conscientiously, putting the call of duty above my natural inclinations; to work with thankfulness and joy, considering it an honor to employ and develop by means of labor the gifts received from God; to work with order, peace, moderation and patience, never shrinking from weariness and trials; to work above all with purity of intention and detachment from self, keeping unceasingly before my eyes death and the account that I must give of time lost, talents unused, good omitted, and vain complacency in success, so fatal to the work of God.

All for Jesus, all through Mary, all after thy example, O Patriarch, Saint Joseph. Such shall be my watch-word in life and in death. Amen.